The 2014 MTV Movie Awards was a hit as Hollywood’s A-list stars in movies, music and TV hit the red carpet for the wild show.

While the award show is known for being a more casual affair, there were definitely some stars who nailed their looks … and a few celebs who missed the mark.

Jared Leto shared a special moment with Lupita Nyong’o on stage, Rita Ora ripped Zac Efron’s shirt off, and Eminem & Rihanna rocked the stage, and while all of those moments were great, we’re more interested in who wore what Sunday evening. 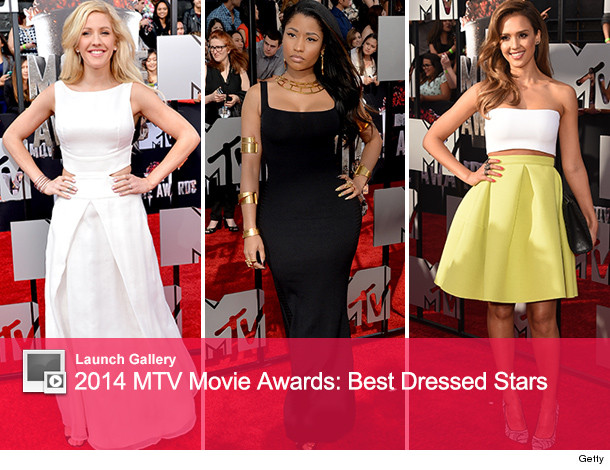 Ellie Goulding looked gorgeous in her white gown. The dress fit the “Lights” singer like a glove, and we love the cutouts in the waist. Nicki Minaj also looked super sexy at the award show — her skin-tight black gown definitely put her curves on display! And Jessica Alba looked like a ray of sunshine in her high-waisted golden skirt and white crop-top combo — she definitely had one our favorite looks from the night.

Lupita Nyong’o won the red carpet, yet again, in a Fall 2014 frock from Chanel. She can really do no wrong but she did have some competition against the cat. 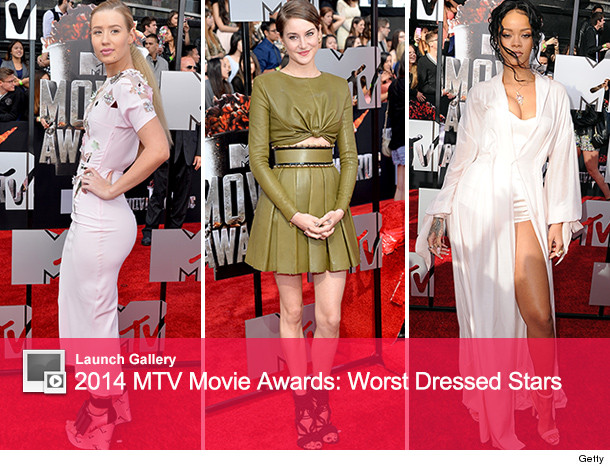 Not everyone nailed their red carpet looks, though. Iggy Azalea’s dress was just all wrong — from the fit, to the crazy embellishments — the outfit did nothing for the rapper’s amazing figure. Shailene Woodley’s ensemble was also a miss. The color of “Divergent” star’s look clashed with her fair skin tone and the tied up top didn’t look quite right with the pleated skirt. And while we love us some Rihanna, her white satin coat and body suit looked more like pajamas rather than an award show look, but beat to the tea still !!

The 2014 MTV Movie Awards went down Sunday night in Los Angeles. Hosted by Conan O’Brien was another interesting evening for MTV.

Check out the highlights below.

Anticipated Performance By Eminem and Rihanna For Monster Received a Standing Ovation.

But forget about Best Movie, as Best Shirtless Performance — and Zac Efron proved why he deserved to win after Rita Ora ripped his shirt off on stage while accepting his award.

Ellen Page showed up to premiere the first clip from “X-Men: Days of Future Past” — and it looks pretty amazing. Featuring appearances from Bishop, Iceman, Kitty Pryde, Blink, Sunspot and Warpath,

During a somber moment in an otherwise wild ceremony, Paul Walker was honored by his “Fast and Furious” costars Jordana Brewster and Vin Diesel.
Brewster gave a moving speech, which can be seen above, while Diesel remembered Paul in a video package shown to the audience.
“The world saw his magic onscreen, the world saw his philanthropic endeavors, I wish the world could have seen how special a brother he was,” he said. He’ll be missed.