Five-time Wimbledon singles champion and world number one Serena Williams is rumored to be pregnant, after the tennis star retired from her doubles match on 1 July.

The 32-year-old was forced to withdraw from her doubles match with sister Venus Williams, as she didn’t appear to have any coordination. “I am heartbroken I’m not able to continue in the tournament,” Serena said in a statement. “I thought I could rally this morning because I really wanted to compete, but this bug just got the best of me.”

German tabloid Bild claimed the rumour around London is that Serena is pregnant and that her French coach and rumoured boyfriend, Patrick Mouratoglou, is the father. Meanwhile, nine-time Wimbledon champion Martina Navratilova told USA Today that she is worried Serena’s condition could be something more serious than viral illness. 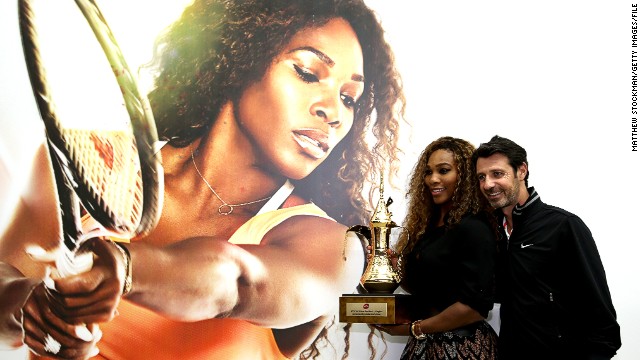 “I find it distressing. I think virus, whatever they’re saying it was, I don’t think that was it. I think it’s clear that’s not the case. I don’t know what it is, but I hope Serena will be OK,” she said. “I’ve never seen anything like it and hopefully never will again. Everybody was put in such a difficult position, including the WTA. It’s not right. It defies logic on so many fronts. The coach said he hadn’t seen her for two days. He didn’t know anything. How can you be a coach and not know anything? That’s wrong. And Venus was just kind of there. You don’t know what’s going on, but virus was not it, that much is clear,” Navratilova continued. After the exit, Serena took to her Twitter account to reveal she is doing well.