Chris Brown’s sat down with MTV News’ Sway on Thursday (September 11), and touched upon the current state of his relationship with Drake, how the Espy’s skit came about and what the conversation was like between the two hitmakers that caused them to burry the hatchet.

“[Drake’s] camp actually called me to do the skit. Especially after getting out of jail, I didn’t have any animosity towards anybody,” he said. 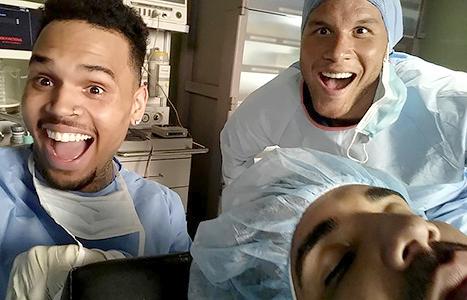 “I wanted to be able to bring light to the situation and just grow up. I’m 25 and I’m not getting younger. You can’t walk around holding grudges, looking over your shoulder and being negative all the time. I’m tired of being looked at as the aggressor, so I just wanted to show my maturity.”

Breezy explained that he and Drake didn’t have a very formal conversation to patch things up — and, no, Rihanna didn’t come up. They simply acknowledged that it was time to leave their differences in the past.

“We’re young, so it’s not like [we had] a pow wow over tea or nothing,” he told MTV News’ Sway Calloway. It didn’t need to be explained. It wasn’t no problem.”

Unfortunately, Breezy’s album X was already completed, and wasn’t able to get Drake on the album, however, the two are still trying to make music together.

“Working on music is something we’re gonna continuously try to do and make happen,” he revealed. “I know it’ll be a big thing for the fans if they hear a song –- but it has to be the right song, for both of us, at the end of the day.”