A movie distribution company slapped Drake with a lawsuit Wednesday, alleging that although the rapper is under contract for the film “Drake’s Homecoming,” he’s claiming not to be involved, and urging fans to boycott the flick to boost ticket sales of his own concert.

The suit claims Drake is shamelessly slandering the Specticast documentary while promoting ticket sales to his own “OVO Fest” concert, which just happened to go on sale the day after “Drake: Homecoming” movie hits theaters

“The Drake Homecoming film is not something OVO or Drake have any part in,” Drizzy tweeted on Monday to his 22 million followers. “I feel it is my responsibility to inform and protect my fans.”

The lawsuit, filed Wednesday in Los Angeles Superior Court, says Drake agreed that Specticast film his 2009 concert in Toronto, is still under contract to receive 15 percent of the profits and OK’d the trailer for the movie’s release as recently as December.

“Without warning, on March 16 2015, Drake initiated a campaign to destroy the film’s commercial value, issuing several false statements via twitter and other social media outlets that he has no affiliation with the film, giving rise to the libelous and false impression that the film’s recording of his 2009 Toronto concert is somehow “unauthorized,” Specticast’s complaint says. 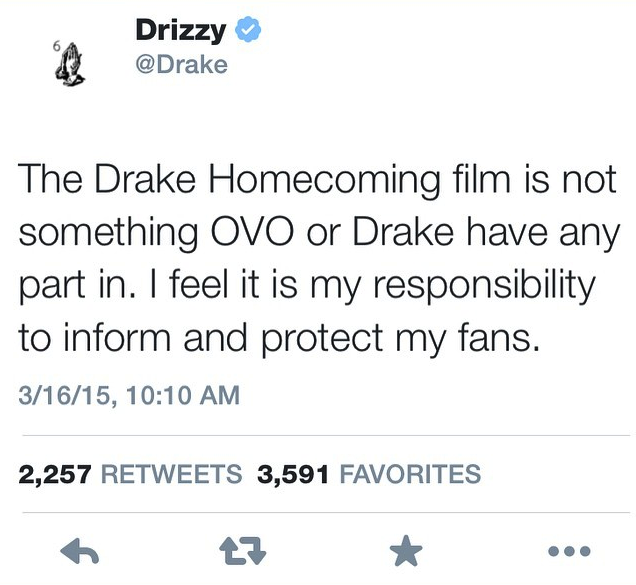