New documents obtained with some pretty explosive internal emails and texts between BET execs, who candidly admit they ordered a transgender host to change his clothes during its big awards pre-show because he looked like a chick.

B. Scott is suing the network, claiming he was ordered to 86 his flowing blue tunic, black pants, hair, makeup and heels because they wanted him to look more like a man, even though they knew he was a transgender person.

During last year’s BET Awards pre-show … Scott appeared in his garb in the first segment but claims he was then ordered to change his clothes and remove his makeup … he obliged but was never put back on the air.

BET Music Programming Prez Stephen Hill wrote a pointed email before the show … “I don’t want ‘looking like a woman B Scott.’  I want tempered B Scott.” Network VP Rhonda Cowan offered help, “I can speak to him about being less ‘womanly.’” 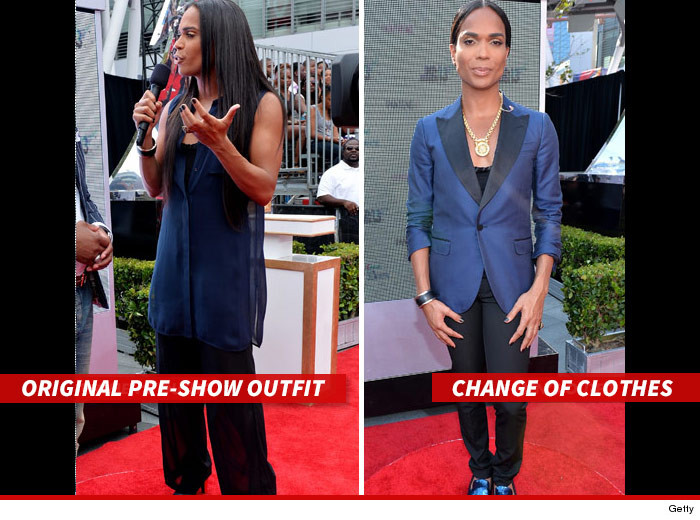 BET had a potential public relations disaster on its hands … because B. Scott went ballistic after being told to change clothes.  BET producer Stephanie Hodges wrote an email shortly after the broadcast, confessing, “He got upset and said he was going to blow this s**t up and call GLAAD.”

BET has said it “embraces global diversity” and regrets unintentionally offending anyone in the LGBT community.

But we got an email showing the network was far more cunning.  It’s from BET honcho Monique Ware:

“The spin should be he was late for a live show and subsequently replaced and it would have been awkward in a live show to have the person assuming his role removed and him inserted.”  It seems she’s saying it would be weird for him to come back on the air as a man.

Ware goes on … “Unless we can make public the reason we didn’t want him dressed the way he normally does, I would stay away from suits, suit selections, etc.”

In the various email and text exchanges … BET execs say Scott had been drinking, was unruly, had shown up late, and was wearing garments that were not pre-approved.

We reached out to BET … so far no word back.