Mastermind is the sixth studio album by rapper Rick Ross. The album will release on March 3, 2014, by Maybach Music Group. He’s helped by collaborators such as the Weeknd, who gives “In Vein” a queasy menace, and Jay Z, who boosts the swagger in “The Devil Is a Lie.” And Kanye West’s trippy, gospel-fied production in “Sanctified” is its own reward. 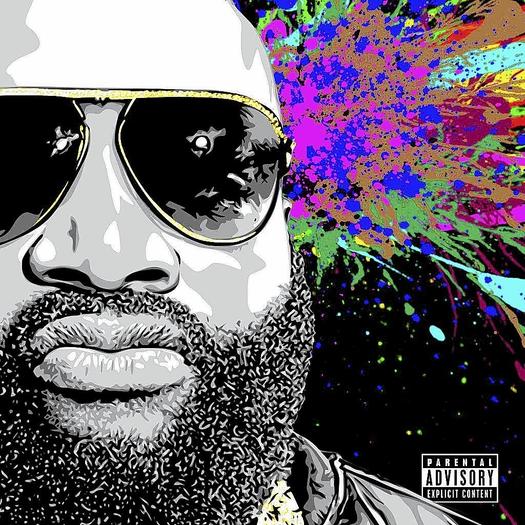 Below watch as the feds watch Diddy and grill Montana, Rozay revisits his 2013 drive-by shooting in his new feature presentation “Nobody”

[Intro: Diddy] You wanted to fucking walk around these roaches These niggas is roaches These niggas is mere motherfuckin’ mortals I’m tryna push you to supreme being You don’t wanna motherfuckin’ You don’t wanna embrace your destiny You wanna get by You don’t wanna go into the motherfuckin’ dark Where it’s lonely You can’t handle the motherfuckin’, the pain Of the motherfuckin’ not knowin’ when the shit is gonna stop
[Hook: French Montana] Mama’s trying to save me But she don’t know I’m trying to save her Man, them niggas tried to play me Man, ’til I got this paper You’re nobody ’till somebody kills you
[Verse 1: Rick Ross] “Blast for me” – the last words from my nigga On the pavement, born killers, body shivers Drug money, dollar figures Hustlers moving out of rentals All the war is mental Having sushi down in Nobu Strapped like an Afghan soldier Nowhere to go to so it’s bang No survivors, only riders on my rider Murder rate rises, stalking niggas on their IG’s Never IB, still solo, underarm is still Polo No wire, on fire My desire for fine things made me a liar A shooter, getting high feeling like it’s voodoo Nine lives, SK with the cooler Makaveli in the ‘Rari, still B-I double G, I, E I pray you smoke with me Go to bed with a kilo like a c-note Janet Reno, we all we got the creed to Nino Pretty cars in the driveway If you cut it then you sideways Double up, crime pays
[Hook]
[Interlude: Diddy] You fucking wanna walk around with these niggas? What the fuck is their culture? Where the fuck is their souls at? What defines you? These niggas with these fucking silly looks on their faces You wanna walk around with them or you wanna walk with God, nigga? Make up your got damn mind
[Verse 2: Rick Ross] I’m from where the streets test you Niggas mix business and pleasure Where the cocaine measure The narcotics is our product The by-product, you walk up on me, I cock it New Mercedes as it peels off Nothing penetrates the steel doors Gang signs, see ’em all I said my prayer as I’m counting sheep Never really athletic, but I play for keeps Do you feel me? The mortician, the morgue filling with more snitches We kill ’em and taking their bitches, R.I.P Chinchillas on a winter night Black bottles when the feeling like you wanna know what winter’s like And I’m never on that tour bus Just a decoy for niggas, the PJ’s, there’s two of us Ciroc boys down to die for Diddy My niggas ride for less, keep it real, homie, make me filthy Touch mine until you receive and kill Like I’m knowing every heathen will Closed the deal with Steven Hill We Magic City of the networks Cut a nigga cast off, how my nigga net works
[Hook]
[Outro: Diddy] Fuck you wanna talk about? Fucking jewelries and Bentley’s and Hublot’s And fucking art that niggas ain’t got on their fucking walls And fucking mansions niggas ain’t got Niggas can’t even pay the IRS, let alone their fucking staff, nigga You gotta tell the truth, man The truth’ll set you free, son The truth will set you free