The New York Knicks have an agreement in place with Derek Fisherto become the team’s next coach, according to reports. The two sides are in the process of finalizing a five-year, $25 million deal.

Fisher, who earned $4.73 million combined over the last three seasons and made $5 million just four times in his 18 seasons as a player, spent the past week deciding on his future after the Oklahoma City Thunder were knocked out of the playoffs. The Los Angeles Lakersat one point had interest in hiring Fisher for their coaching vacancy. Fisher also was mulling a return to the court or a transition to the front office, but ultimately decided to join Knicks president Phil Jackson in New York.

Fisher’s relationship with Jackson is believed to be one of the factors that led him to choosing the Knicks. Fisher won five titles while playing for Jackson in Los Angeles.

The two have remained close since Fisher’s playing days. Fisher and Jackson spoke briefly over the phone last week.

Fisher, 39, earlier this month spoke about his desire to coach in the NBA.

“In the last maybe decade or so, I’ve really felt like my purpose in life, my calling so to speak, was to be in a leadership position or some position of impact on other people,” Fisher said after the Thunder were eliminated from the playoffs. “Coaching allows for you to positively impact other people’s lives.”

Jackson noted recently that Fisher’s on-court leadership could translate well to the bench. He called Fisher “a person that’s on my list of guys that could be very good candidates for this job” and was fined $25,000 for those comments.

Jackson initially sought Steve Kerr for the Knicks vacancy. Kerr accepted an offer to coach the Golden State Warriors instead of the Knicks. Jackson essentially put his coaching search on hold to wait to speak to Fisher first after missing out on initial top Kerr.

Since Jackson agreed to take over as Knicks president in March, sources say he has always intended to hire a young coach he could mentor. He also wanted to hire a coach with whom he had a relationship. Fisher fits both criteria.

Sources maintain that freedom is important to Jackson, who wants to establish and maintain an on-the-floor role in his first-ever stint as the lead decision-maker in the front office for a franchise.

The 18-year veteran played parts of nine seasons under Jackson in Los Angeles. Kerr was unquestionably Jackson’s top choice — Jackson revealed late last month that he had a verbal commitment from Kerr before Golden State began negotiating with him.

But the idea was always to hire someone he’s worked with in the past who would also welcome Jackson’s on-the-floor presence at training camp and practices, thus allowing the 68-year-old to have more of an impact than he might have if restricted to a front-office role.

So Jackson turned to Fisher, who played in an NBA record 259 playoff games and won an NBA record 161. Fisher isn’t the first point guard to go straight from the playing floor to the bench.

Jason Kidd made the same transition last season with the Brooklyn Nets. The Nets lost in the second round of the playoffs to the Miami Heat.

Fisher takes over a Knicks team that finished with just 37 wins last season and missed the playoffs for the first time in four seasons. Jackson fired Mike Woodson and his coaching staff shortly after the conclusion of the regular season. Fisher and Jackson will work together to fill out the coaching staff. 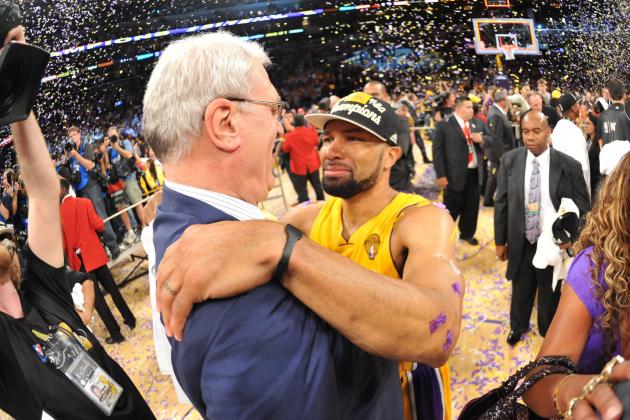