It appears Phil Jackson has come to the realization that keeping Carmelo Anthony in the fold is not a possibility and is willing to complete a sign and trade in order to try and recuperate some of their losses as they move in a different direction. 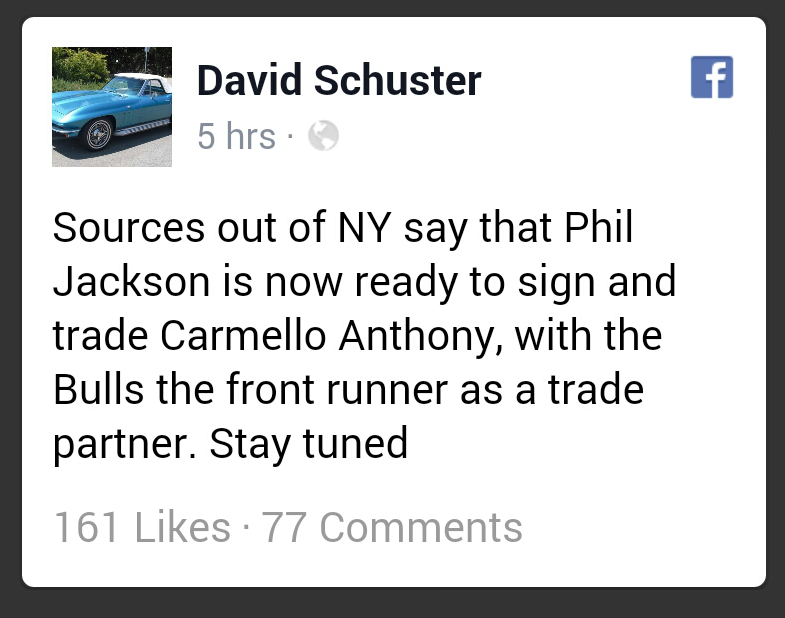 Carmelo Anthony sent formal notification to the Knicks before Monday’s deadline he will exercise his opt-out clause and become a free agent July 1.

This doesn’t mean Anthony is leaving, and the Knicks still like their odds of retaining him. The Bulls and Rockets will be his two most ardent pursuers, but neither is under the salary cap and would need to make moves to sign him. Even if he takes a small pay cut, the Knicks can pay him a lot more than Chicago likely can, even if the Bulls slide under the cap. The Knicks can offer Anthony a maximum five-year, $129 million deal with a salary starting at $23 million per season. Even in a best-case scenario, the Bulls can’t come close to that starting salary and can only offer four years.

“I want to be a free agent,” Anthony told the New York Observer in October. “I think everybody in the NBA dreams to be a free agent at least one time in their career. It’s like you have an evaluation period, you know. It’s like if I’m in the gym and I have all the coaches, all the owners, all the GMs come into the gym and just evaluate everything I do. So yes, I want that experience.”

The Lakers, Mavericks and Heat figure to pursue Anthony, too.