Several dozen people were killed Friday in the deadliest attacks to hit Paris since World War II, French President Francois Hollande said, announcing that he was closing the country’s borders and declaring a state of emergency.

At least 35 people died in shootings and explosions at multiple sites, many of them in a popular concert hall where patrons were taken hostage, police and medical officials said. The series of attacks gripped the city in fear and recalled the horrors of the Charlie Hebdo carnage just 10 months ago.

The officials spoke on condition of anonymity because they were not authorized to be publicly named in the quickly moving investigation.

There was no immediate claim of responsibility for the series of attacks. 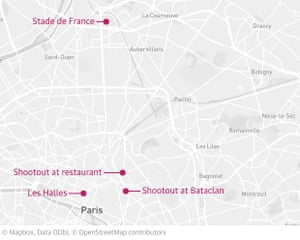 Hollande, in a televised address, said the nation would stand firm and united against the attackers.

He also said security forces are assaulting one of the sites hit by Friday’s attacks, without elaborating.

U.S. President Barack Obama, speaking to reporters in Washington, called the attacks on Paris “outrageous attempt to terrorize innocent civilians” and vowed to do whatever it takes to help bring the perpetrators to justice.