Snoop Dogg has declared a truce with Iggy Azalea … officially squashing the beef after just one phone convo with T.I. Snoop just posted a video mea culpa where he says, “No more bad talk. I apologize. I won’t do it again.” He says the peace treaty was engineered by Iggy’s manager … T.I. 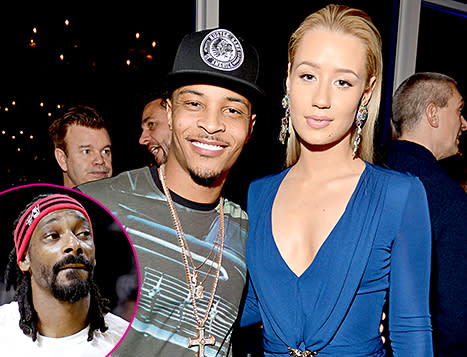 In case you missed it, the feud between Snoop and Azalea began on Monday, when Snoop posted a meme-like image mocking the “Fancy” singer’s makeup-free photos. The Australian rapper then tweeted at Snoop, calling him an “ass.”

Snoop continued to harass the songstress on Tuesday, calling her a “bitch” and saying she looks like Marlon Wayans’ character in White Chicks. Azalea, for her part, remained collected until later in the afternoon when she posted (and then deleted) a photo of Snoop which read: “When your drug addict aunt gets clean,” with the caption: “Glass Houses @snoopdogg Im a ‘bitch’ because i called u out for being a secret fan? Grow up & god bless.”

Snoop never mentions Iggy by name during the brief message — but Iggy immediately accepted the apology on Twitter.

With the war of words so heated, you gotta wonder what T.I. said to cool things off so quickly. We spoke to Snoop and he would only say … “Tip called me, it’s over. Got a lot of love for cuz, so I let it go! Too much money on my mind to worry bout a biiiiiych.”

It’s over I’m bac on my cool shit no harm no foul. #ifitaintaboutthe