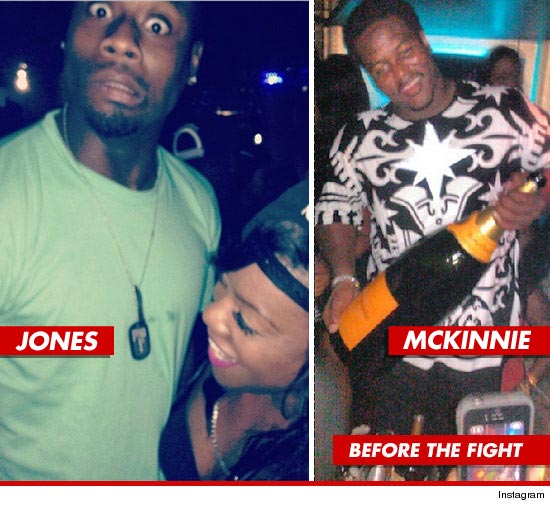 “Baltimore Ravens wide receiver Jacoby Jones was hurt early this morning after a brawl erupted on a party bus filled with his Ravens teammates and Female Dancers.

It happened after a night of partying in Washington D.C. celebrating Bryant McKinnie’s birthday.

Sources at the scene tell us … at about 3 AM, as people were leaving Opera Ultra Lounge, people on the bus began fighting.

One eyewitness tells us he saw a bottle being swung at Jacoby Jones — it connected with his head and hurt him.  We’re told an ambulance was called “for a bleeding male” but he was not taken to the hospital.

Our sources say a stripper named Sweet Pea is the one who hit Jacoby with a gigantic Ace of Spades bottle and this may have triggered the brawl.  We’re told the bottle smashed over his head and he was “bleeding everywhere.”

We’re told Jacoby’s friends tried to retaliate against Sweet Pea the stripper but Bryant McKinnie tried to stop them, and a fight broke out between the friends and Bryant.

Police responded to the scene but no arrests were made.  We’re told there was evidence of an assault but no one cooperated with cops”