Johnny Manziel is still waiting to announce his decision whether or not to leave college early for the NFL. Rapper Jay Z’s Roc Nation Sports agency, however, might have recently made an impression on the star third-year sophomore. Speculation swelled that Manziel, who led a thrilling comeback over Duke in the Chick Fil-A Bowl, could be the next recruit for the rapper-turned-sports agent after the two partied in vip at the same Miami club this past weekend. 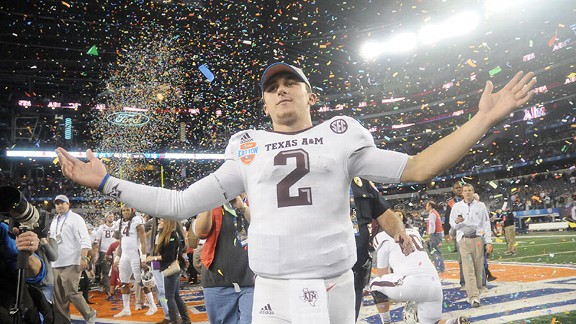 Manziel — who drives a matte black Mercedes C63 AMG coupe, is close friends with Drake and goes by the nickname “Johnny Football” — was later spotted hanging in the same VIP area where Jay and company occupied a table. An eye witness said that when Manziel arrived, he was handed a bottle of Ace of Spades champagne – which goes for $300 retail – and told by a club staffer, “Welcome to the gold-bottle life!”