While 22-time Olympic Medalist Michael Phelps is cooling his heels in rehab, his girlfriend had a little information she wants to share with the world. Apparently the misses was once a mister — kind of — and decided to go public with that info before running it past her boyfriend first.

In a post on her Facebook, Chandler is revealing she was actually born a boy, and named David Roy Fitch at birth.

As a teenager however Chandler went on testosterone blockers and had her name changed and then, in her early twenties, underwent corrective surgery to get rid of her male genitalia.

Chandler was born a male however in name only, and is actually intersex, meaning she had male genitalia, but no testicles, while also having a uterus and no ovaries.

As she explains in a Facebook post, ‘I was never a man, never lived as a man. No one can say they knew me as a man or produce a photo of me as a man.’

She then adds, ‘There are people that remember me as an androgynous child at times because of what was forced upon me.’

She is also revealing how in love she is with Phelps, and how they two clicked after meeting on Tinder.
‘Spending time with him was like a teenage love affair,’ she says.

‘I have never felt so comfortable and accepted in every way as I did with him.’

She had previously detailed their first date, to a Baltimore Ravens games, to the National Enquirer.

‘One thing led to the next, and we made love during halftime,’ she says.

‘Later, we had sex again. The intimacy with him was amazing! It was the first time in my life that someone has made me feel like a true woman.’

She also told the magazine that she never lied to the swimmer about her past, saying it just never came up.
Now however, Chandler thinks Phelps may leave her after telling her truth.

‘I am probably going to lose him because he is a brand that his team wants to protect and things since he went to rehab came to my attention that didn’t put him or our relationship in the best light,’ 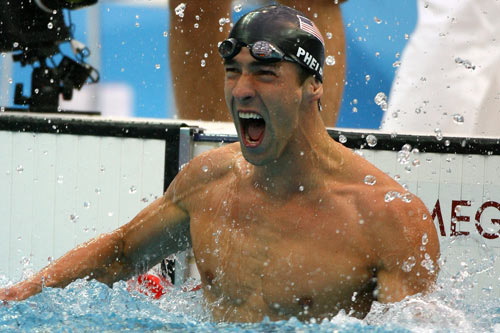