Samsung has just pulled back the curtain on its newest smartphone, the Galaxy S5, a device the company hopes will be your next smartphone — yes, even you, iPhone folks. So if you are an iOwner who’s always contemplated the switch to one of those shiny, big-screened Samsung phones, you may want to take a peek at our side-by-side measurable comparison between the S5 and the 5s — that is, the newest from Samsung and Apple (confusing, we know).

Here are the specs for the Samsung Galaxy S5 and the Apple iPhone 5s. And then, we’ll explain what those differences actually MEAN below: 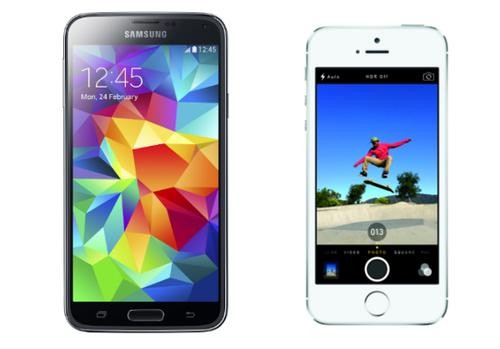 You can find Android on many other mobile devices made by many other companies; Samsung modifies Android into something called “TouchWiz,” a special version of Android that features effects and design elements unique to Samsung phones. Most Android phone makers have their own “skins”: HTC has something called “Sense”; Nokia just released a version of Android that looks an awful lot like Windows Phone, with large animated tiles.

You can get a comprehensive breakdown of TouchWiz here. Diffen, meanwhile, breaks down the biggest differences between Android and iOS in a comprehensive, somewhat technical column here. Basically, updates to iOS tend to come quicker and with predictable regularity, and iOS features a deeper and better app selection. Android, meanwhile, is way more flexible, meaning you can adjust it to your liking more easily than you can the rigid iOS. Updates bringing more features tend to be occur with irregularity and unpredictability, due to a variety of reasons, chief among them the pickiness of your phone carrier.  But you may want to try both in an electronics store before making a decision either way.

Display Size:  The display is measured from one corner to the other. The below picture from Laptop Mag shows the difference in your hand. Generally, it’s accepted that a larger screen, like that of the Galaxy S5, is better for viewing movies and reading text, while the iPhone 5s fits more conveniently in your hand and in your pocket.

Display Type: Samsung and Apple use two different display technologies in their phones. The resolutions tend not to matter since, at a certain point, the human eye cannot make out these individual pixels, and images on the screen will appear totally unpixelated and high-def. Whether you like the iPhone’s LCD screen or Samsung’s AMOLED is a matter of personal preference. Again, get thee to an electronics store and find out for yourself. (CNET has a nice, non-technical breakdown of how LCD and AMOLED differ here.)

Processor and RAM: Apple and Samsung diverge on the kind of processor they use, but equal each other on the amount of RAM they have onboard. This battle concerns phone speed, and these numbers matter less than you’d think. It’s all about how Samsung and Apple maximize those processors and RAM to make the smartphone run. Check back in several weeks to see if the Galaxy S5 can match the iPhone 5s — notoriously quick — in opening and switching between apps, web browsing and more daily tasks. Samsung and Apple are both at the point, however, where their premier phones are reliably, equally speedy.

Cameras: Again, we’ll have to wait at least a few weeks to see several test photos from the Galaxy S5 before we can determine which camera takes higher quality photos and videos, in both dark and light situations. As David Pogue has warned many times, however, DO NOT be deceived by the count of the megapixels, popular among advertisers as the be-all-end-all of measuring camera quality. The number of megapixels do NOT a great camera make: It’s all about the lens and the sensor, which we haven’t gotten to test out on the Galaxy S5 just yet. Initial reviews of the Galaxy S5 have been universally positive.

Storage: How much stuff your phone can hold. Both the iPhone and Galaxy offer you the option of 16GB, 32GB or 64GB. The Galaxy S5 also lets you insert a small SD card (sold separately) to “expand” your device storage by up to 64 more GBs if you have a ton of photos, videos or songs you want to store. So-called “expandable storage” is one of the major advantages of the Galaxy S5, and Android phones in general, in the battle against the iPhone, which can only hold the number of GBs that you purchase. Accompanying a slot for an SD card tends to make the phone slightly bulkier, and saving to that card can take getting used to. If you can live with those sacrifices, you’ll get more storage.

Batteries: mAH refers to “milliamp hours,” a measure of storage for the battery and is fairly meaningless. Again, this is less about total mAH than it is about how much battery power the display and the processor of the Galaxy S5 require. The times above are what Apple and Samsung claim their phones can get under ideal conditions; wait for comprehensive field tests from sites like AnandTech or GSM Arena, which put all smartphones through rigorous battery life tests and rank them against each other, before deciding based on battery life.

Weight and Dimensions: Pretty straightforward: The iPhone 5s is lighter than the Galaxy S5. The Galaxy S5 is also much taller and wider than the iPhone 5s, to support its larger screen. Again, test it out in the electronics store, as though you are trying on a new pair of shoes. Put it in your pocket, and try typing with one hand, to see how you adjust to each.

Extras: We pit the Galaxy and iPhone’s fingerprint sensors against each other here. Early reports say that Apple’s Touch ID is more accurate than Samsung’s fingerprint scanner. Samsung’s scanner, however, can verify your identity for mobile payments, and it also features a heart-rate scanner on the back of the phone. Both Samsung and Apple feature voice control — through S Voice and Siri, respectively — though each has its voice recognition flaws.

The Galaxy S5 is rated IP67, for “Ingress Protection 67,” a definition of which you can find here. IP measures how well a device’s enclosure can keep out dust and water; a complete dust-proof and waterproof device would score IP68, so that 67 number is a triumph for Samsung. It reflects a phone that is highly dust- and water-resistant. In this case, the S5 is deemed completely resistant to dust (a 6 out of 6 on the scale), and resistant to between 15cm and 1m of water (a 6 out of 7 on the scale). Not totally submersible, but getting it wet won’t cause immediate harm like it may on the iPhone. (If you’re an adventurer, or just clumsy, you can buy bulky cases for the iPhone that will make it IP68.)

There are other features that distinguish the iPhone 5s and Galaxy S5 from each other as well (including colors, the material used to build the phone, available accessories and a lot more) but these should give you a sense of how the two diverge. Until we can put the Galaxy S5 through our own tests, we won’t really know how fast it is, how good the camera is, or what kind of battery life it gets. That’s the importance of the smartphone review: Ours will arrive some time in April, before the Galaxy S5 hits the shelves in the United States.