George Zimmerman, 29, could get life in prison if convicted of second-degree murder for gunning down 17 year old Trayvon Martin on Feb. 26, 2012, as the unarmed black teenager, wearing a hoodie on a dark, rainy night, walked from a convenience store through the gated townhouse community where he was staying.

George Zimmerman was fed up with “punks” getting away with crime and shot 17-year-old Trayvon Martin “because he wanted to,” not because he had to, prosecutors argued Monday, while the neighborhood watch volunteer’s attorney said the killing was self-defense against a young man who was slamming Zimmerman’s head against the pavement, George Claims “Self-Defense”

Last Chance For The Defense To Claim Self Defense & Prove Zimmerman Acted on Innocent Human Nature & Did Not Hate Martin.

Defense: ” Zimmerman Gets Benefit of Doubt Says” If You Cant Decide Who’s Screaming, He is Innocent”

Fireworks Stirred Over Charges, The Jury Instructed  Of New Options. The Defense was irate about email about possible 3rd degree murder charge instead of aggravated assault. The Judge Explains & handles Don West Firmly That This Case is Possible “Man Slaughter & 2nd Degree Murder and If She Made an Mistake. He Can Appeal”

State: Zimmerman ” Presumed Something” says Zimmerman Was Angry Previous Suspects Got Away

State: Zimmerman Profiled Martin as a Criminal &  Made Assumptions

State: “Martin Was There Legally ” He Was Not Trespassing In His Dad’s own Neighborhood”

State: People Can’t Take Law into Their Own Hands, Says Even The Police Must Abide By The Law & a Hoodie: Is Not Against The Law

State: Zimmerman Did not Try To help Trayvon After Shooting Him, Leaving His Body There & Stretching His Arms Out, Reveals A lot “

State: “Why Follow, Why Get Out The Car Even After The Police Told You Do Not Do That Sir, Pointing at Zimmerman”

The defense team, scheduled to close Friday, has maintained that Trayvon, 17, was the aggressor and that Zimmerman, 29, shot him in self-defense

This Week The Court Saw 10 Witnesses, As testimonies continues in the Trayvon Martin vs George Zimmerman murder trial, the jury comes closer to reaching a verdict.

The lead police investigator in the shooting case, Chris Serino and another Sanford Police investigator, Doris Singleton, were asked questions about Zimmerman’s first recorded interview and his written statement on what happened that night. When asked during cross-examination, Serino also admitted that he believed Zimmerman’s “minor injuries” weren’t consistent with his story. Zimmerman told Serino he estimates being hit between 25-30 times by Trayvon.

Singleton also suggested that maybe Trayvon had been afraid of Zimmerman, because Zimmerman was following him.

Zimmerman replied, “I wasn’t following him, I was just going the same direction he was.”

The state’s star witness, Rachel Jeantel, who recounted the final moments on the phone with Martin.

“He told me the man kept following him,” Jeantel testified. “I say, ‘Trayvon,’ and then he said, ‘Why are you following me for?’ And then I heard a hard-breathing man come say, ‘What you doing around here?’ … And then I was calling, ‘Trayvon, Trayvon.’ And then I started to hear a little bit of Trayvon saying, ‘Get off, get off.'”

To Add to her testimony the clarity of neighbor and witness John Good testified that the lighter skinned man was on the bottom. He also described to the jury the clothing that he saw.

“The color on top was dark and the color at bottom was … red,” Martin said. Zimmerman is a white Hispanic who was wearing a red jacket while Martin, who was black, was wearing a dark sweatshirt. “The person on the bottom, I could hear a ‘Help,'” Good said. 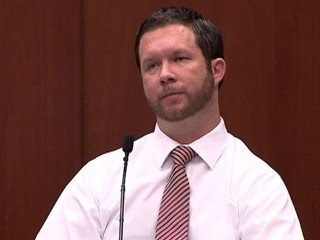