As Reported by TMZ “Chad Johnson was in court in Broward County, FL to face the judge for his recent  probation violation in his domestic violence case.
During the hearing,  the judge and Chad’s lawyer were about to finalize the terms of Chad’s  punishment — terms that were pretty favorable to Chad.
But the whole  thing fell apart at the last minute, when the judge asked Chad if he was  satisfied with his attorney — and the ex-NFL star reached back and playfully  slapped his lawyer’s ass. 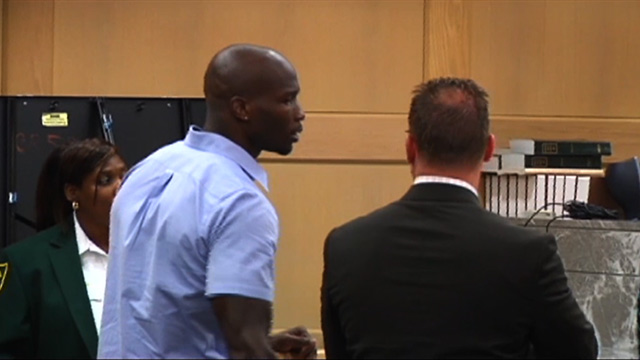 Chad smiled … the court erupted with  laughter …. but the judge wasn’t amused.
In fact, the judge found the  move disrespectful — and lashed out at Johnson … asking him if the whole  proceeding was a “joke” to him.
Johnson replied, “I had no intent to  make this a joke, because my life is in shambles right now.”

The judge —  who lost her patience — suddenly announced that Chad’s deal was OFF … and  kicked him out of the courtroom.  Mr. Johnson was arrested and is currently being booked.
His probation was also extended until December 21, 2013 … and he must complete an additional 25 hours of community service along with extra therapy sessions