Chris Brown is the proud father of a 9-month-old baby girl … TMZ has learned.

The baby’s mother is a 31-year-old former model named Nia — who we’re told has known Chris for several years.

Sources connected to both Nia and Chris tell us they are on very good terms — however they’re not together romantically. We’re told 25-year-old Chris is happy about being a father.

It does not appear there is a formal child support order in place — and we do not know the nature of any informal terms of support.

Karrueche Tran slept on it, and she’s decided — Chris Brown and his baby are not going to be part of her life because she can’t take any more drama.

Chris’ now ex-GF just reacted to the story TMZ broke — that Chris has a 9-month-old baby girl — tweeting, “Listen. One can only take so much. The best of luck to Chris and his family.”

As we reported … the baby’s mother is a 31-year-old woman named Nia … who’s been friends with Chris for several years.

Karrueche ended her tweet with a very definitive … “No baby drama for me.” 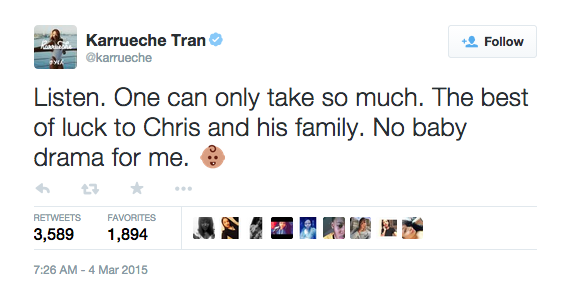